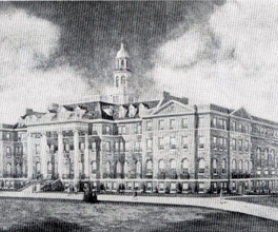 On an autumn morning in 1928, 11 students entered the doors of Our Lady of Mercy Academy. By the end of the year, there would be 30 students comprising the 8th and 9th grades.

The year before in 1927, the Sisters of Mercy of Brooklyn began plans for building a boarding school in Syosset. Its location in the Town of Oyster Bay, the cornerstone of colonial settlement of the north shore, suggested that the building be colonial in structure. In keeping with these early roots, the sisters envisioned a Georgian structure whose main entrance on Syosset-Woodbury Road would be enhanced by a tall-pillared portico with graceful Doric columns. Georgian influence would be seen in paneling, lighting fixtures and windows.

Perhaps the distinguishing feature of the building is the colonial tower rising 117 feet and patterned after Independence Hall in Philadelphia. Benjamin Franklin would have felt right at home if he walked up what was the back entrance, but now, with an added canopy, has become our main entrance

Geographically, our 96 acres create an atmosphere of spaciousness and natural beauty. They also provide opportunities for education. Our wide, rolling acres serve the Athletic Department for softball, tennis, soccer, lacrosse and track. The Science and Art Departments use the grounds for extended classroom instruction and experimentation, including our Arbor Day ceremony of planting memorial trees.

Although the Academy was built as a boarding school, it always made room for day students who were few in those early days. By 1964, however, with increased population growth on Long Island, it became obvious that there was not so much a need for a boarding school as for day students. Dormitories were converted into classrooms, and dining rooms into cafeterias. The parlors still remain for meeting parents and guests, and providing meetings for special events.

World War II brought difficult times to the Academy. We were involved in food stamps, rationing, victory gardens, air raid drills, and two hours of weekly instruction in First Aid. A few English students were sent to escape the bombing in Europe. Students could watch the young aviators training from local airfields, since the Academy tower was used as a turning point for them, and they thrilled the students by tipping their plane wings in greeting.

The years after the war saw a tremendous growth in curriculum enrichment and parent participation. A PTA was established in 1948, and, with tremendous support from parents and friends, we were able to build a new gym in 1978. Curriculum has been enriched in art, dance, music and theatre. Advanced placement courses, college affiliation classes, computer labs, Internet access, on-line databases and a completely automated library media center, all indicate that OLMA has progressed from those early 20th century years with 11 students, 5 faculty and a Regents approved curriculum for the times, to the threshold of the 21st century with 500 students, 69 faculty and staff, and a curriculum providing access to all colleges and professions, and preparing women with a Catholic, value-centered future.

We use cookies on our website to give you the most relevant experience by remembering your preferences and repeat visits. By clicking “Accept”, you consent to the use of ALL the cookies.Accept